July 29, 2017
Game Maker State Machines often end up being very large objects, with a seemingly endless number of lines in each Event. I wanted to approach the creation of State machines using the powerful dynamic functions GameMaker provides, in order to make better use of the Object Resource. 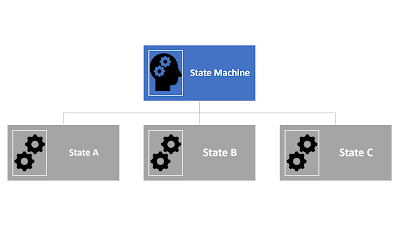 The Basic Idea is to have a separate object for each State the state machine can be in.
Such a state object would have all the behaviour associated with that state, in each of the respective events as you would program any other object. The code can reference variable just as if you were inside the main object. 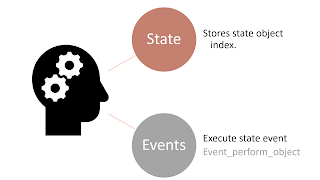 The State Machine object stores the Object index of the current state in a 'state' variable, and has each of the events found in the state object call the event from the state object using event_perform_object.

Event_perform_object is a great function that calls the code from another object's event, within the currently executing instance. This is great to get 'inheritance' like systems when you don't know at compile time what object you are inheriting the event from. This is such a case.


This system has the advantage of being incredibly flexible, compared to a monolithic approach.
States can be reused and shared between state machines.
States are also easier to identify and work with, as they are self-contained, making it easier to follow the logic.


However, The issue remains that variables must be shared across all states, which can mean trouble when dealing with very large, or otherwise complex state machines.
This is why I propose yet another alternative: The Action actor model.
I have already made a video on such a system, which you can find here, but I will also be posting a new blog post explaining the system in more detail and explaining why the small performance cost associated with more instances is mostly irrelevant for most use cases.

For now, I hope you learnt at least something from this post, if not simply a new way of creating state machines. If you have any questions or ideas I would love to discuss them in the comments, which you can find below!

Popular posts from this blog

July 24, 2017
GML, or the GameMaker language has regularly been a little awkward for me to use due the lack of a core feature. That would of course be structures, a programming language staple allowing you to group together values under a single variable.


In the past, I would have recommended using arrays to act as structures, as described in my youtube video, and this is probably still good advice today (Or at least until YYG implement lightweight objects). However tired of messing around with arrays in my projects, I have decided to let robots take over, and generate all that code for me.

This is how I started creating GMStruct. A tool and language to bring structs to Game Maker.
Introducing code generation allows for numerous upgrades over 'array structs', allowing for inheritance, and even some polymorphism, all handled behind the scenes.


The GMS Language "So how does it work?" I hear you ask. Well it's pretty simple:
The first step is to define the stru…
Read more

August 20, 2017
In a previous post, I went through the basic usage of GMStruct, but I deliberately left out some details about inheritance and types. This is what I will be covering in this post.

Basic Types First of all, let's go over types in GMS. The first thing to note is that GMS comes with a set of basic types you can use: The String, Real, Pointer, Array and Boolean types.
You can use them to set the type of your struct attributes, in order to restrict the types of values you can pass to them at runtime. So far, nothing new.

Struct Types However, there are more types available in GMS; every struct you define will have its own type. This allows you to define an attribute to have a struct type.
For instance, you could have a Cat and an Owner struct. The Cat struct may have an owner attribute. That owner struct would be defined to be of type Owner.
This would look like this:

Inheritance So now we have basic struct types out of the way, let's have a look at inheritance.
Let's look at t…
Read more

November 08, 2018
As part of my BSc in Games Engineering, I wrote a dissertation on Efficient Entity Component Systems. I thought I would share it with the world rather than let the data sit on my hard drive.
You can find some of the code I experimented with here.
Read more